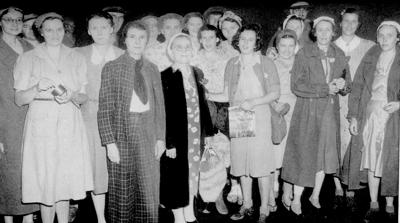 The following photograph was taken by Major G B Massingham commanding officer of the 1st Australian POW
Contact and Enquiry Unit Manila 4 September 1945. 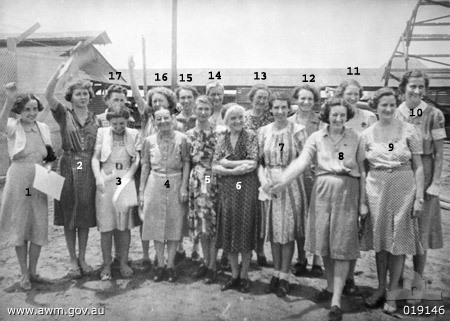 These nurses were amongst the longest serving Australian POW's/internees of WW2. Because of their dedication to duty they were captured at Rabaul New Britain on the 23rd January 1942 and spent 3 years nine months as internees. These women have an extraordinary place in Australian history for they are the only Australian women ever captured by an invading force on Australian territory (New Britain being a mandated territory) taken to Japan. Little was known of their time as internees when I first started researching them eleven years ago. Grace Kruger kept an amazing diary for the duration of her internment. She titled her diary GK's Nonsense so that if it was discovered by the Japanese she could dismiss it as a work of pure fiction. It is in fact a factual record of the women's everyday life as POW's. Lines in the diary such as "White sauce on the table how's your sister" and "But your a LBW" had me totally confused. I thought the meaning of the diary had been lost with the death of it's owner. With extensive research I have been able to translate the diary, explain the politics behind their interment and the political problems the sinking of the Montevideo Maru caused both the Japanese and Australian governments in 1942. 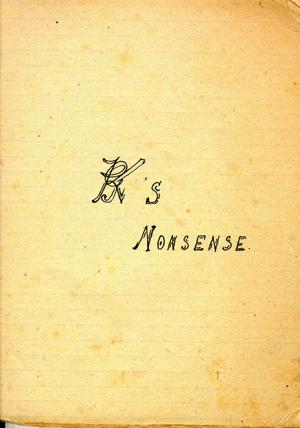 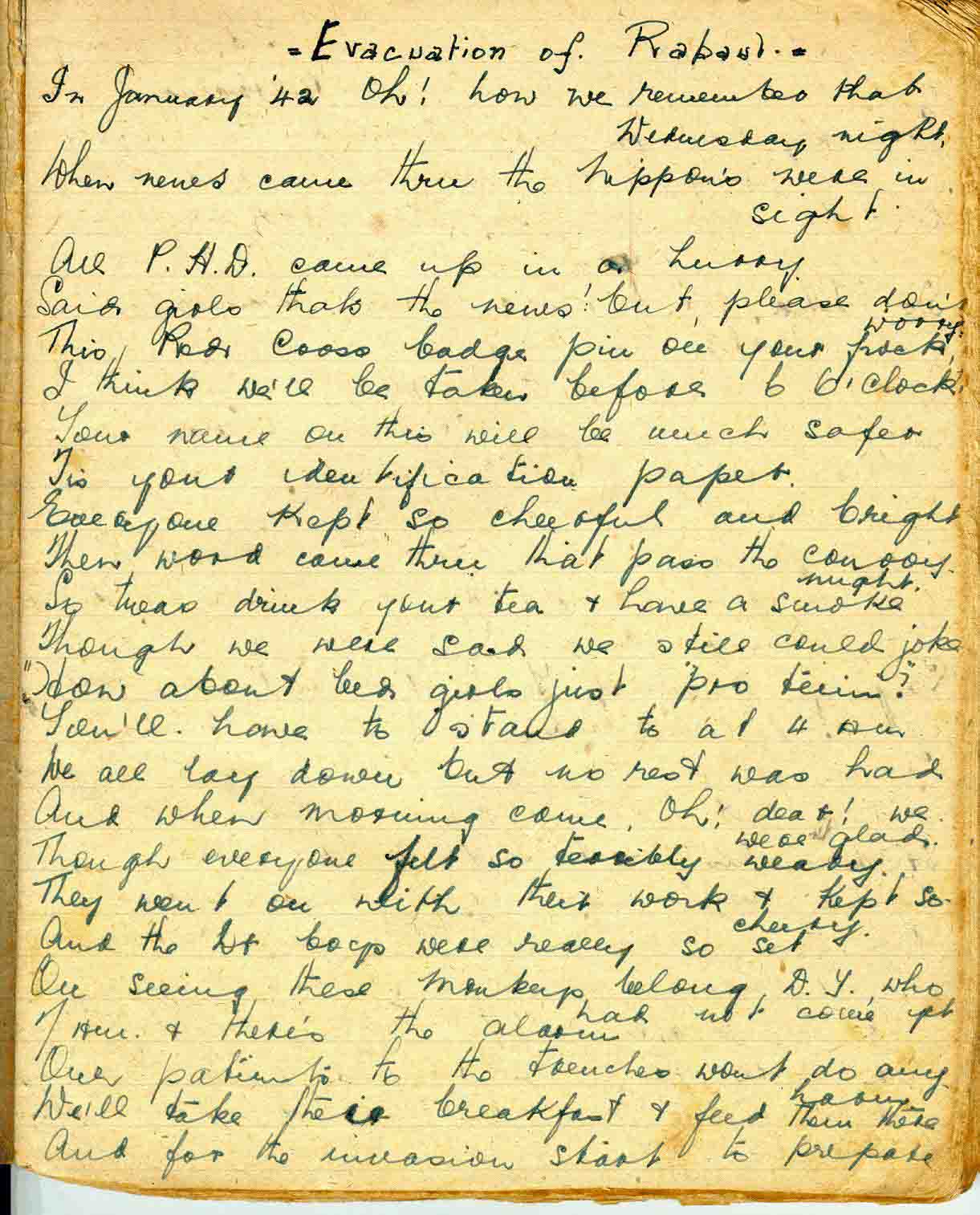 The cover and first page of Grace Kruger's internment diary.

"Evacuation of Rabaul"
"In January 42 oh! how we remember that Wednesday night, when word came thru the Nippons were in sight"

Her diary is not dated like a conventional diary but is written as prose or poetry, so if discovered by the Japanese or the casual reader she could dismiss it as pure nonsense written for her own pleasure. It's taken years to fully understand it's meaning. I had never heard of the nurse's taken from Rabaul to Japan. It was through a stroke of luck that I discovered the surviving nurses. With extensive research I have located five of the other nurse's diaries. The diaries had all been written with some degree of encryption such as pigeon English and short hand to protect their authors. With the five dairies transcribed I set about painstakingly comparing the dates and events and with the help of the survivors I have been able to translate the meaning of Graces diary with a few words just to difficult to read. Then in August 2006 unbelievably 61 years after it was written a second copy of Grace's diary was discovered amoungst the memorabilia of Joyce Oldroyd-Harris. It seems to have been written at the end of the war whilst they were still in Japan. Fortunately with the words she couldn't read or understand Joyce has asked Grace for an explanation and made notes of their meanings. She also identifies the nurses who Grace cryptically mentions by putting their initials after the relevant lines. She probably made the copy as they were room mates in Totsuka and because of its highly descriptive nature, which contrasted greatly to her own very small diary. 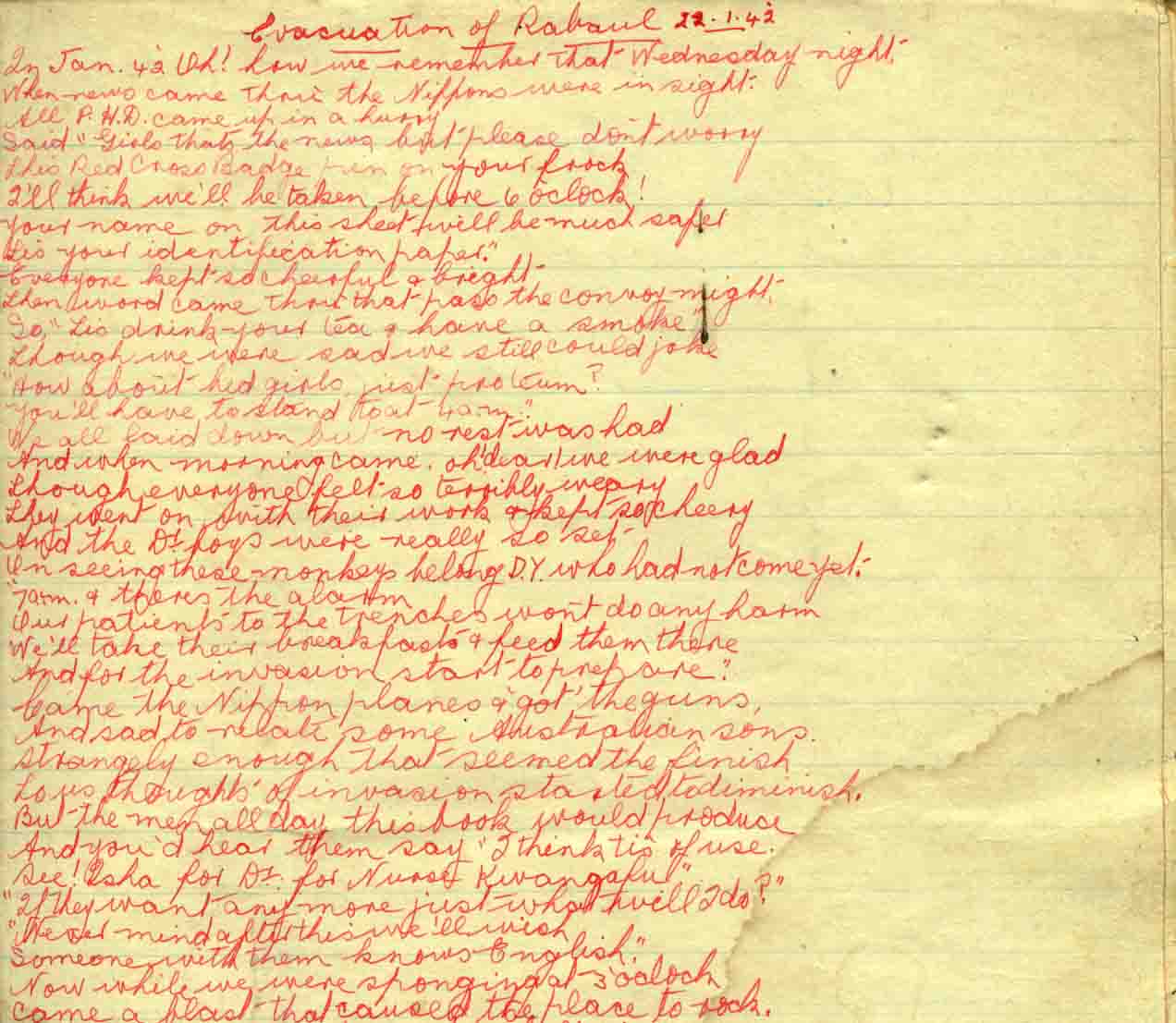 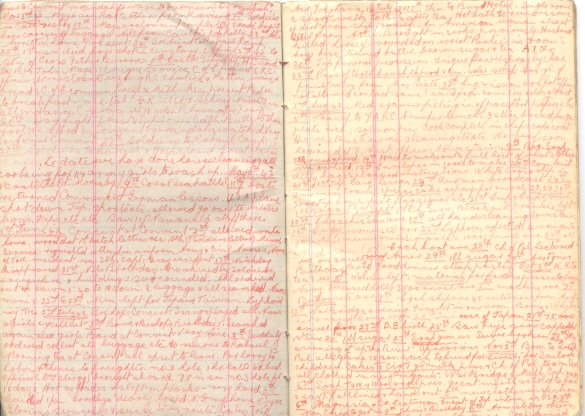 Joyce Oldroyd-Harris's diary.
The pages are 10cm wide X 14cm high and held together by woolen thread.
With tiny pen and ink writing she has managed to get a months entry to a page.

The diaries reveal many insights into life, politics and the effect of events in Japan during the war. They are a unique record.

At a seminar held at the Australian National University 22 August 2006 "Towards a Better Understanding: Reflections on the Experiences of Australian Prisoners of War of the Japanese", a research member of the POW Research Network Japan, Mrs. Mayumi Komiya, delivered an excellent paper containing new information about the Rabaul Nurses. Mrs Komiya wrote:

On top of the other problems, the Japanese Government kept the existence of the nurses secret, rejecting inquiries from the Australian Government or the International Red Cross. On December 9, the day following the outbreak of war, the International Red Cross in Geneva made a proposal to the Japanese Government about establishing a POW Information Bureau, based on the 1929 Geneva Conventions on the treatment of POWs. The Japanese Government accepted this proposal, and opened the POW Information Bureau within the Army Ministry on December 27. Therefore, they had a duty to provide a list of civilian internees as well as POWs. However, they didn't perform that duty until June 1945, as far as the Australian nurses were concerned. That made it impossible for the nurses to receive visits by the International Red Cross Board delegates, aid money or relief supplies. They had also been excluded from the correspondence privileges allowed to POWs and civilian internees. Without encouragement from their home country, religious support and comfort from the Catholic Church, as well as being isolated from the international community, they fought these difficulties on their own. Why? Here lies a problem that needs recognition and clarification.

Extraordinarily the same question had been asked exactly 61 years earlier. In her report 23rd August 1945, Margherita Straehler of the International Red Cross who had visited the women at Totsuka wrote:

All efforts to find out why this group of nurses was treated in this distressing way and why their status was never settled have been in vain. No clear instructions seem to have been given by competent authorities to the Kanagawa Prefectural Police. There was no responsible Camp Commander, members of the Police staff taking it in turns to control the camp. Miss Parker reported several incidents of the nurses, herself included, having been hit by policemen, and in general they were treated with contempt when not with harshness. Insistent and repeated requests to be allowed to contact the Red Cross were all refused. The tragic situation of these nurses, who should have been accorded special protection, but who, during over three years of captivity were completely isolated and denied all assistance to which they were entitled, is one which demands an explanation. 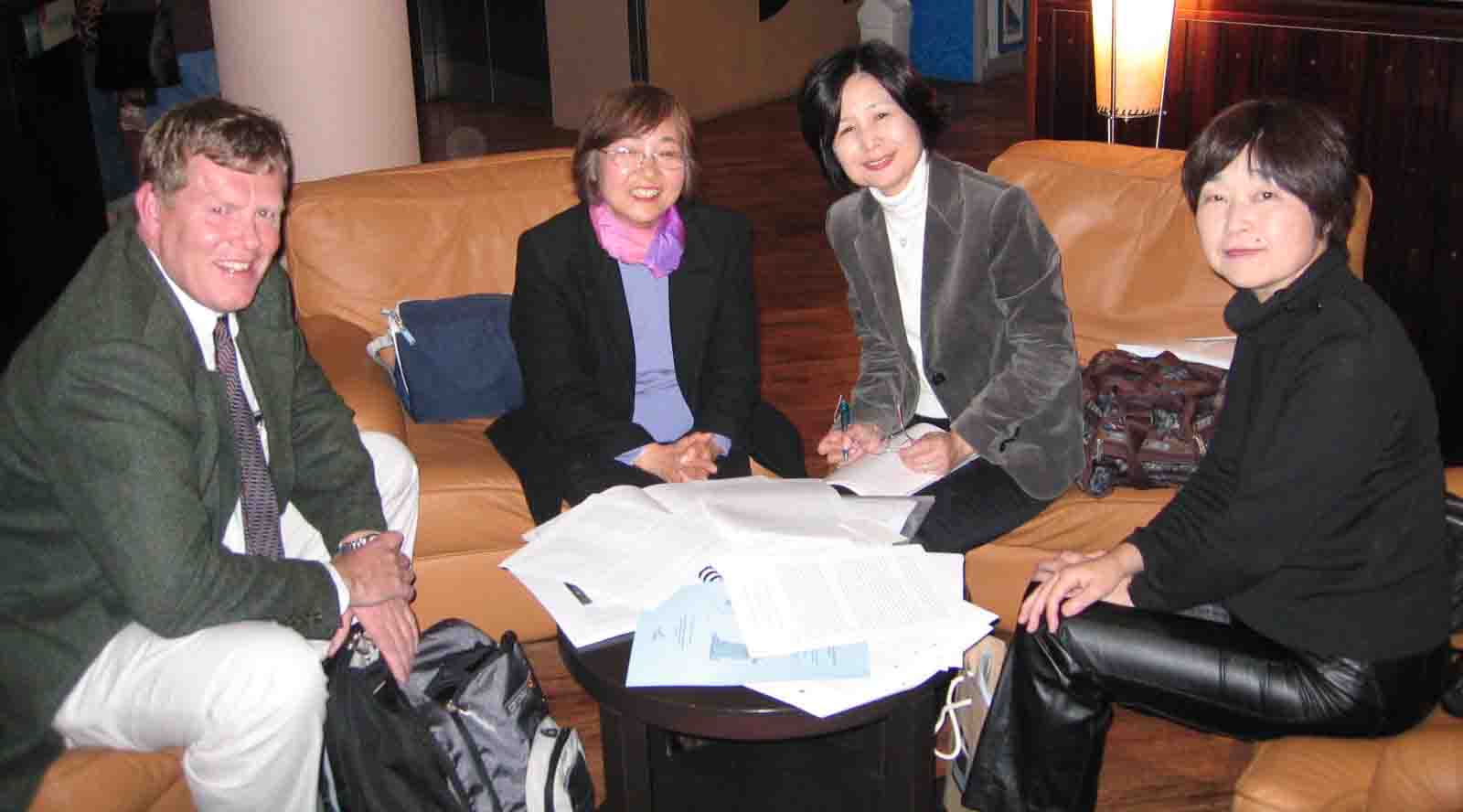 We have always known:

But up until now no one could answer "Why"?

"Lost Women of Rabaul" answers most of the questions about these women, the politics behind their internment
and their time in Japan. It also explains why the Japanese couldn't report the sinking of the Montevideo Maru during the war.